Beyond ‘territoriality’: DLead wants Jewish fundraisers to experiment with collaboration

The group, founded in 2020, is expanding its cohorts to attract more Jewish professionals to the idea that they can share best practices even if they're competing for grants. 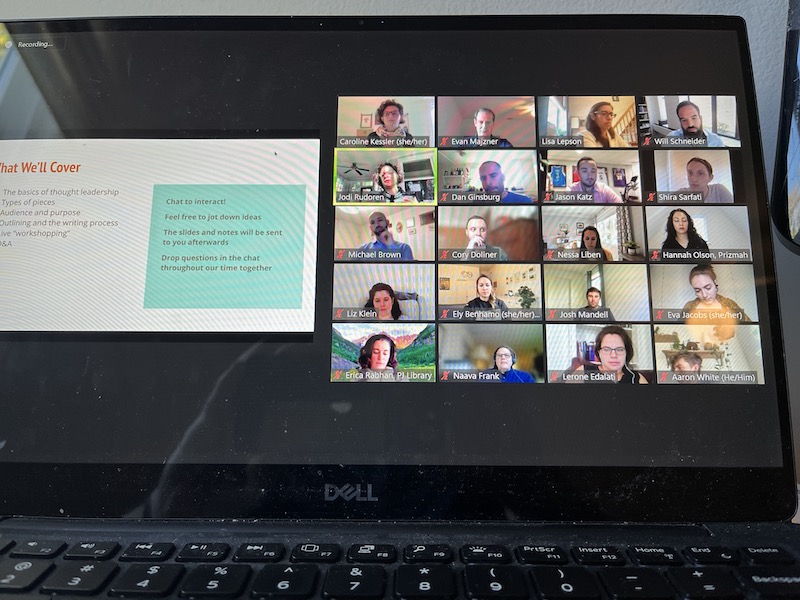 A DLead cohort meets via Zoom.

In a Jewish world where nonprofit fundraisers often compete for grant money and facetime with donors, a fledgling group wants them to try something new: collaboration.

DLead, founded by Evan Majzner, launched in 2020 to bring together 18 senior fundraisers from Jewish groups to share best practices and discuss challenges. Now, DLead is expanding that model, hoping to recruit other Jewish fundraising professionals into additional discussion groups, starting a mentorship program and publishing a blog on the sector.

Majzner, an executive at the Israel tour organization iTrek, is staking the enterprise on the idea that there’s less competition, and more dollars available, than most Jewish fundraisers think. “There’s an assumed territoriality where people assume that people wouldn’t be able to help them because we’re all vying for the same pot of funds,” Majzner told eJewishPhilanthropy.

“With many of the foundations that you allude to, there are significantly deep pockets, where it’s not Moishe House or Honeymoon Israel — it can be both,” he added, naming organizations in the original DLead cohort. “Even if we’re competing for the same dollars, that doesn’t mean that we all shouldn’t be better.”

Spaces for discourse in the Jewish nonprofit world already exist — from the sidelines of The Jewish Federations of North America’s General Assembly to the pages of this publication. But Majzner says none of them focus on DLead’s core mission: a conversation by and for Jewish development professionals aimed at honing their craft.

The original cohort, which is still together, meets every one to two months via video chat, sometimes discussing a specific topic, like transitioning back to in-person events, and sometimes hearing from an external expert. Jodi Rudoren, editor-in-chief of The Forward, and the writer Caroline Kessler, recently spoke to the group about blogging.

“To some extent, knowing I have a crew, a network of fundraisers behind me or alongside me, shifting as I shift, gives me confidence essentially to propose, sometimes, big ideas… and to be able to say, ‘Here’s what i’m thinking about, and it’s backed up by the fact that 10 of my colleagues in other organizations are thinking along similar lines,” cohort member Nessa Liben, chief advancement officer at the Jewish Education Project, told eJP.

Soft guidelines do exist to make sure the group stays functional. Members, for example, never discuss specific donors or requests for proposals as a cohort. All the same, Liben said, “All our minds are turning about, which funders are we going to reach out to? Right now, innately, there’s a limited pool of funders.”

The DLead expansion has created new cohorts, for sub-fields like fundraisers who work with institutional partners, grant writers or fundraisers in Israel. Another program, DLead Mentors, matches veteran fundraisers with entry-level employees across organizations. And the Charles and Lynn Schusterman Family Philanthropies is funding a $500 annual match for professional development for some DLead members.