The bat mitzvah at 100: An ongoing revolution

The widespread adoption of the bat mitzvah was not just an end in itself. In congregations around the country and across the denominational spectrum, growing numbers of young women who had benefited from access to bat mitzvah and robust Jewish education began to push for other new Jewish roles as well. Many wanted their bat mitzvah to be not the culmination but rather the beginning of their public Jewish lives and leadership.

These days, the bat mitzvah is the quintessential Jewish ritual in the life of a teen girl. It’s so ubiquitous that it has become almost banal. But it was only 100 years ago, on March 18, 1922, that 12-year-old Judith Kaplan — daughter of Rabbi Mordecai Kaplan, the founder of Reconstructionist Judaism — became the first American girl to mark her bat mitzvah publicly during synagogue worship, at the recently established Society for the Advancement of Judaism (SAJ). This first bat mitzvah was not yet the equivalent of a boy’s bar mitzvah; Judith neither stood at the bimah nor read from the Torah herself, and her father had told her only the night before what the ceremony would consist of. But the young girl helped to propel a movement that, over the course of the next century, transformed women’s roles in Judaism — indeed, transformed Judaism itself. 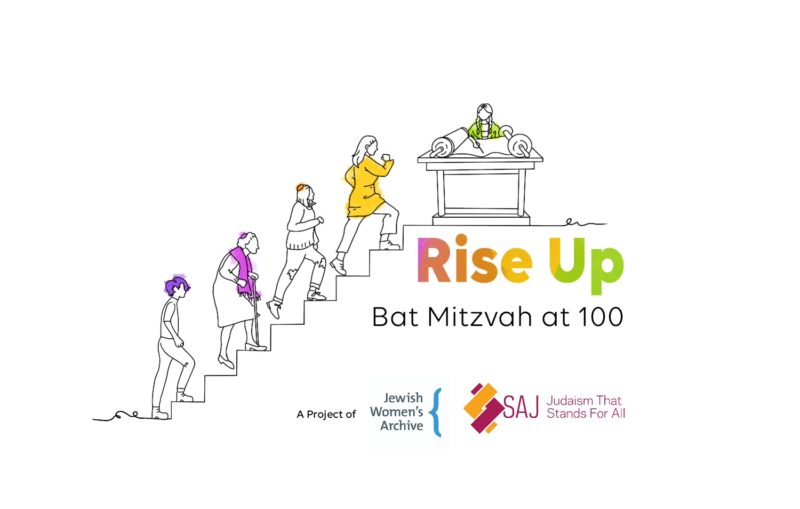 The widespread adoption of the bat mitzvah was not just an end in itself. In congregations around the country and across the denominational spectrum, growing numbers of young women who had benefited from access to bat mitzvah and robust Jewish education began to push for other new Jewish roles as well. Many wanted their bat mitzvah to be not the culmination but rather the beginning of their public Jewish lives and leadership. Why should they be called up to the Torah once as twelve- or thirteen-year-old girls but never again? Why should they not be counted in the minyan or be ordained as rabbis? In many cases, mothers learned from their daughters how to advocate for change. The first woman rabbis, ordained in the 1970s, stood on the shoulders of the first half century of bat mitzvah girls, as did the members of Ezrat Nashim who presented a manifesto for women’s equality to the Conservative Movement’s Rabbinical Assembly on March 14, 1972 — almost fifty years to the day after Judith Kaplan’s big day.

The emergence of the bat mitzvah in the twentieth century also paved the way for continued innovations in Jewish coming-of-age ceremonies in the twenty-first century. As contemporary society adopts more fluid ideas about gender, the gender division inherent in the distinction between “bar” and “bat” mitzvah is in some communities giving way to the gender-neutral “b’mitzvah”—which even made an appearance in And Just Like That…, the recent remake of the iconic 1990s TV show Sex and the City.

Today, Jewish feminism has so thoroughly transformed many Jewish communities — as reflected in the evolution of the bat and b’ mitzvah, the emergence of women rabbis, the proliferation of feminist ritual and liturgy, and much more — that we often forget how new, in the long scheme of Jewish history, it really is. The hundredth anniversary of the bat mitzvah provides an ideal occasion not only to celebrate these transformations but also to reflect on their continued unfolding and the relevance of history. It reminds us of the continual evolution of the meaning of gender, the expansion of what it means to be an inclusive community, and the crucial roles of young people in creating change.

This week, we invite you to join Jewish communities across North America in celebration of one hundred years of bat mitzvah and the gender revolution it sparked. The Jewish Women’s Archive and SAJ: Judaism that Stands for All have partnered with a wide variety of organizations on a National Shabbat: Rise Up/Bat Mitzvah at 100 on  March 18-19. Explore educational resources, new liturgy, oral history tools, and the @JudithKaplan1922 project on Instagram, which imagines how Judith Kaplan might have kept a video diary of the days before and after her groundbreaking bat mitzvah. Kick off the celebration on March 17 with a multi-access event featuring Dr. Carole Balin, Rabbi Sandy Sasso, Rabbi Joy Levitt, Rabbi Mira Rivera, and Rabbi Tamara Cohen. And most of all, take time this Shabbat (March 18-19) to honor our foremothers and the young people who will lead the way into the next one hundred years of Jewish transformation and renewal.