U.S. census data found that nationally, the number of parents homeschooling their children doubled in 2020-2021. 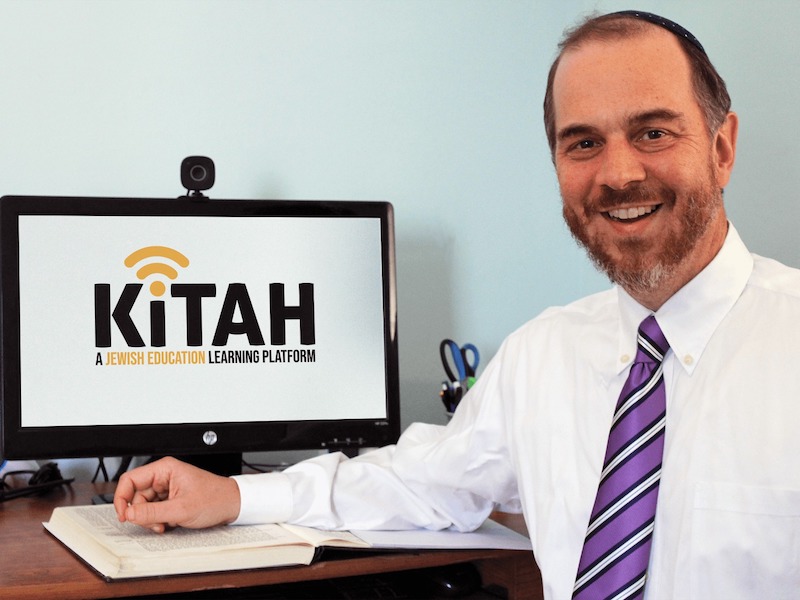 Before the pandemic began, Suri Kinzbrunner was a Jewish preschool director, and her seven children between the ages of 1 and 14 spent their days either in Jewish day school, preschool or with a babysitter at their home in Silver Spring, Md.

Now, they all spend their days at home, together. In May 2020, Kinzbrunner began the transition to homeschooling her children, after enjoying spending more time with them during lockdown and seeing how they thrived doing activities based on their own interests.

But she still craved one piece of their old schooling: Jewish education. That August, she discovered an online program called Kitah in a Facebook post. The program’s asynchronous learning model, in which lessons could be done on a child’s own time at their own pace for an affordable price, was exactly what Kinzbrunner was looking for. She watched a sample lesson with her children and her 12-year-old son, Eli, decided to join for the school year starting in September 2020.

Kinzbrunner is part of a small but growing trend of homeschooling parents who began seeking out Jewish classes for their kids during the pandemic, when the national homeschooling rate doubled amid quarantines and school closures. Kitah, Hebrew for classroom, serves students from fifth to eighth grade. Another program, Gesher, Hebrew for bridge, is for kindergarten through sixth grade. Together they had roughly 100 students last year.

Spolter intended for the program to augment day school classes, not replace them. When Spolter and his wife would host young people for Shabbat meals over the years, the couple  noticed that even after receiving a full Jewish education, their guests struggled to read and understand ritual texts associated with Shabbat. Spolter attributed that knowledge gap to the challenges educators face in teaching youth of different abilities in one classroom, along with the challenge of getting them to spend time reading in an age of digital entertainment.

“I felt that if we could offer an online tool that would empower teachers to bolster their students’ learning outside of the classroom or even inside the classroom, to offer them that kind of flexibility, that could be something very powerful to make the students’ learning more grounded in the texts that they’re actually learning,” Spolter told eJP.

But Spolter’s initial outreach to schools about the program, in August 2020, was largely unsuccessful. The last thing they were looking for, he said, was another virtual learning program, given their reliance on Zoom during the pandemic. So the following year, he shifted the program to focus on homeschool families. So far, 35 kids from across the U.S., as well as Canada, Finland and Italy, along with two schools, have participated in Kitah. Spolter’s long-term vision is to build up a library of lessons that can be used by teachers and students all over the world.

Kitah now offers two monthly plans for families: Tanach (Bible) and Mishnah & Gemara, both of which include two weekly online classes and a live Zoom lesson for $119 per child per month. Schools pay a fee of $500 to license a 20-lesson course for one school year, with no limit on the number of students or usage.

“I liken it to piano lessons,” Spolter said. “If you do the work, and you put in the time and the effort, then the child will really grow.”

Kitah is based on the model used by the Khan Academy, the website offering online courses where students work through videos and associated practice exercises for different subjects at their own pace.

“The challenge is this kind of instruction doesn’t exist on a high level in Judaic studies,” said Spolter. “So that was the impetus to create the Khan Academy model for teachers to use in the classroom.”

Gesher is targeted toward homeschool and public school students. Run by Chanie Kirschner, a former Jewish day school teacher who began homeschooling her own kids in 2018, Gesher grew to 95 students in the 2020-2021 school year, the first full academic year of the pandemic, and had 65 last year.

“COVID was the best thing to happen for homeschooling because it normalized it,” Kirschner told eJP. “All of a sudden I met all these people who were really like-minded… So I had one kid whose family was driving across the United States in an RV, and they would log onto class from a state park in New Mexico. It was amazing.”

Gesher’s students, depending on age group, study the weekly Torah portion, the Bible or Jewish laws. The classes generally divide according to the students’ ages, but the determining factor is skill level, such that in one class this past year, a 5-year-old and a 13-year-old were in the same class. The classes run 45 minutes, based off of a Powerpoint, and are a mix of traditional frontal learning and activities like matching games.

Gesher costs $600 per year for students taking one class a week, and $1,200 for two classes per week.

“In general, homeschooled kids like learning for the sake of learning, and they’re generally more patient with the class,” Kirschner said. “I have a couple homeschoolers where this is their only formal education… so they’re excited to come to Gesher and have a class. They’re really excited to take notes.”

Spolter also eschewed a fully traditional classroom experience, and designed Kitah to honor Jewish oral tradition where knowledge is passed from teacher to student. So the videos and exercises serve as a “first reading,” he said, giving students an initial exposure to the text.

Each lesson includes 10 to 15 minutes of teaching, divided into three or four sections. Each section is followed by a series of questions asked through Google Forms that reinforce the lesson. A teacher can then use that initial exposure to dig deeper into the material, so students  learn not only a text but the ideas and meaning behind it.

Although students receive feedback from Spolter during the program, there are no formal report cards.

Kinzbrunner says her son Eli felt highly motivated by the program, and consistently completed his lessons during the 2020-2021 school year, when he also had his bar mitzvah. Thanks to the confidence he developed with Kitah, she said, he now studies with rabbis in person.

“It helped Eli to develop the skills but in a way that he didn’t have to feel self-conscious because it wasn’t in a classroom with a lot of other kids,” she said. She added that her younger son, Shimmy, who just turned 12, also appreciates the environment Kitah affords, particularly the live weekly Zoom lesson that has now been added to the program. “I’m in the house and I’m hearing him laughing and talking. It’s nice that he has that social aspect,” she said.

Some schools have also found the program useful. Gavriel Ziegler, who serves as the campus rabbi and Judaic studies teacher at Phyllis Jowell Jewish Day School, an Orthodox school in Cape Town, South Africa, began using Kitah alongside the school’s classroom teaching last year. Students attend Mishnah classes only twice a week, and he said most of his fifth and sixth grade students don’t have a strong command of Hebrew.

Kitah, Ziegler said, enabled the students to access engaging, well-structured content themselves, and engage with the texts on their own terms before discussing them with a teacher.  Ziegler usually takes two class periods to go over a single online lesson. In the first, the students access the lesson on their Chromebooks, put on headphones and individually work through the material. In the subsequent session, Ziegler reviews the questions that come with the lesson and leads a discussion of the material.

“[It] makes it a bit exciting as it’s different [from] a normal class,” Ziegler told eJP. “But at the same time, [the program] doesn’t have something that will distract them [so] they’ll lose focus on the main point. Reuven puts [in] excellent questions that make sure that they engage with the text, for example, the translation of certain words. The only way they’ll know that is if they listened carefully to the video.”

Spolter has also tried to forge a personal connection with the children who take his classes virtually. Kinzbrunner said he has been a role model for her sons, even making time to connect with Eli when he visited Silver Spring last year.

“I don’t know that there’s a huge homeschool Jewish community,” she says. “So, wherever you can find those connections to someone or something else, I think that’s really important.”

For Spolter, the way a student relates to the texts they learn in his courses has long-term implications.

For instance, once a youth goes to college and attends a Shabbat dinner, “Does she feel comfortable? Can she read the text?” Spolter asks. “That’s really the question that’s going to guide very often what choice she’s going to make in her life and what she’s going to want for her own family.”