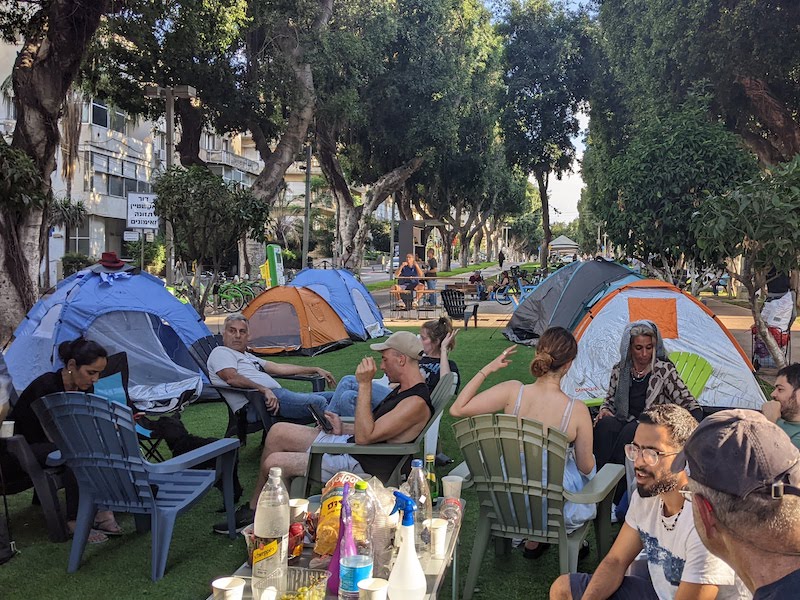 Activists sit amid tents on Rothschild Boulevard in Tel Aviv on June 21, 2022.

For Sigal Cohen, last week in Tel Aviv was a blast from the past: colorful tents lining each side of the leafy Rothschild Boulevard, strangers dropping off all manner of free food — from plums to Deep River Zesty Jalapeno potato chips —  idealistic activists typing furiously into cell phones to organize an upcoming protest.

It felt just like a miniature version of the massive demonstrations, popularly known as the  social justice protests, that swept the country in 2011, even though the tents themselves stayed on Rothschild for just a week. The set of young activists was different, but after 11 years, the same frustration over Israel’s high cost of living remained.

“Your income will never match your rent here,” said Cohen, a mother of four from Eilat who traveled north to Tel Aviv last week to pitch her tent on Rothschild last week, one of the city’s central thoroughfares and a prime hangout spot for the city’s youthful denizens, lined with street cafes, grassy banks and restaurants.

Cohen was active in the 2011 tent protests and a number of demonstrations for housing and disability rights in the intervening years. “Everything is so expensive,” she told eJewishPhilanthropy. “But we are here to speak the truth, and no one can squash us.”

In 2011, tents stretched along the entire length of Rothschild, which became a temporary urban encampment with rules and norms, puppet shows, nightly lectures and even a dating service. The seven-week protest saw thousands of tents occupied at dozens of sites around the country, filled with people angry at the stressful economic situation. It culminated with the largest demonstration ever seen in Israel, in which almost half a million people took to the streets in a single night, demanding more affordable housing, better childcare options and more social services.

Eleven years later, economic indicators show that in some ways, things have only gotten worse: inflation is at 4%, part of global inflationary pressures and the highest in Israel since 2011. Housing prices have increased by 16% in the past year. Even fresh vegetables, a staple of the Israeli diet and identity, are up by 5.5%. In Tel Aviv, the average rent has increased by 10% just since the beginning of the year.

But while the tent protests in 2011 made demands of a relatively stable government led by Prime Minister Benjamin Netanyahu, who would go on to serve for nearly another decade, this year the protests have to contend with a perpetually chaotic political system. Days after the first tents went up, Israel’s government announced that it would dissolve after one year, leading to the fifth round of elections since 2019. So if the protests continue, it’s unclear who exactly they will be protesting against.

At least one major organization that was active in the 2011 protests, the Histadrut, Israel’s General Federation of Labor, is waiting to see what will happen with the political uncertainty.

“We’re going to take our time and work smartly to make sure we can make a difference,” Histadrut spokesman Yaniv Levy told eJP. “It’s hard now because a lot of the things we work on are all about budgets, and when there’s no government, there’s no budget, and it’s hard to take care of these things.”

Levy said he doesn’t expect the current tent protests to grow much larger because the social and political situation is different this time around. “In 2011, we didn’t have this political chaos that we’ve been in for years,” he said. “But if the candidates, and it doesn’t matter which party they’re from, don’t take enough action on the cost of living issue, we will go back out into the streets.”

Not everyone takes that view. Yonatan Freeman, a political science lecturer at Hebrew University, thinks the elections, which are expected to take place in the fall, could provide a platform for the activists to inspire real change.

“One of the goals for the organizers of these initiatives is to try to make these issues a main part of the election season,” said Freeman. Israel’s four recent rounds of elections were dominated by  personality politics rather than issues, he said.

“It was, ‘vote for me because I’m not him,’ or ‘it’s either Netanyahu, or those against him,’” he said. Freeman’s hope is that during the impending election season, parties will run on substance.

“If more parties will be talking about ‘vote for me and I’ll do something about it,’ the discussion is more issue-based, more based upon what’s affecting daily life,” he said. Freeman also pointed out that inflation is not a problem unique to Israel. Instead of saying, “What’s happening is that there must be someone to blame and we have to think about who it is,” Freeman said, protesters should “focus on, how does Israel prepare for this continuing storm? What can we do?”

The high cost of living is an issue that affects everyone across party lines, a rare point that unites a deeply divided Israeli public. Before the government collapsed, protest tents popped up in a number of Israeli cities, including Beersheva, Holon and Pardes Hana, as residents tired of ballooning costs gave voice to their frustration.

Although activists in Tel Aviv packed up the tents after a week due to pressure from the municipality and their inability to secure a permit from the courts, they are continuing to organize. More than 20,000 people have expressed interest on Facebook for a protest planned for July 2 in Tel Aviv against the high cost of housing.

But the activists on Rothschild said they were completely unwilling to cooperate with any politicians, whom they blame for getting them into the current situation in the first place.

“There’s been no change from 2011 and it’s only gotten worse,” said a protester named Rafi, who declined to give his last name and said he has been struggling with homelessness off and on for eight years. Rafi moved into the Rothschild protest camp last week. “It’s really a catastrophe, things are getting much more expensive,” he added. “But the change won’t come from the government, it will only come from the people.”

Yochai Yaoz, a protester who was also active in the 2011 demonstrations as a high school student, said current activists are worried about people hijacking their message for personal political gain. He cited Itzik Shmuli and Stav Shaffir, two central voices in the 2011 protests who went on to become members of Knesset for the Labor party, a phenomenon the activists want to avoid this time around.

Any time someone in their WhatsApp organizing group is identified as a party activist, they are immediately removed, Yaoz said, no matter what party they’re from. He said some activists met briefly with Daphni Leef, the instigator of the 2011 protest, when she came to visit on their first day on Rothschild. But they don’t want to work with any other organizations or activists from 2011.

“A lot of people are skeptical that we’ll be able to do anything because of [such high hopes from] 2011,” said Yaoz. “There’s a lot of exhaustion. But things are starting to explode.”

The feeling appears to be mutual: Organizations that were active in 2011, like the Histadrut, aren’t running to embrace the new tent protest and are taking a more cautious approach.

The National Union of Israeli Students (NUIS) was another one of the central organizations in the 2011 protest, and university students were leaders in most of the local tent encampments across the country. Since 2011, NUIS has worked in close connection with lawmakers, parliamentary finance committees and activists on several initiatives to make higher education more attainable and increase affordable housing for students. The union has pushed forward initiatives to build more dorms, increase scholarships for students in need and a unique initiative called “We Live Here,” matching students who need housing with elderly people who want to stay in their homes but need support.

“We are really looking at how we can contribute to the day-to-day conversation of what is needed, how we can help students who are on the brink,” said a spokesperson for the NUIS.

The organization is currently in talks with partners and local leaders to figure out the best way to advocate for students during the current situation, with both the elections and the tent protests. “It’s certainly an opportunity to bring issues to the forefront that are relevant for students,” the spokesperson added.

The activists living in the tents on Rothschild aren’t banking on the election to give them the momentum to ignite the same kind of movement that swept the country 11 years ago. They’re hoping that anger is enough to get people out into the streets.

“At first, I was skeptical about [these protests],” said Cohen. “But I hear this buzz is happening. It’s already happening in so many cities.”