The move 'just felt like it made sense from all sides: for him, for us, and for the community,' Jonathan Greenblatt told eJP 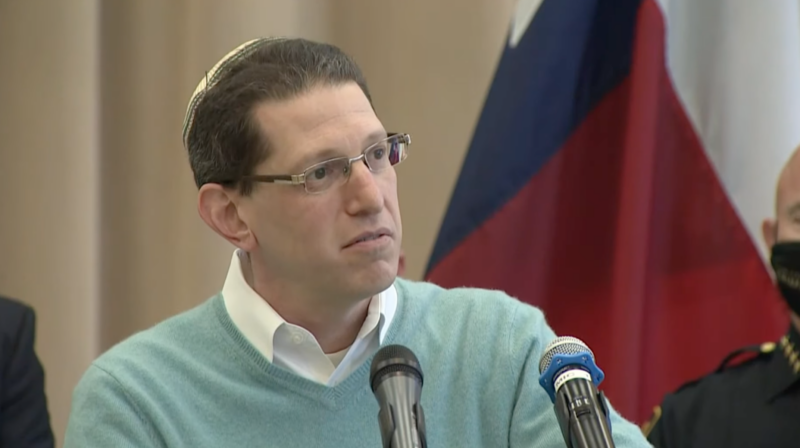 In mid-January, Rabbi Charlie Cytron-Walker captured national attention for calmly navigating an 11-hour hostage crisis at Congregation Beth Israel in Colleyville, Texas. Held at gunpoint with three congregants by a British man demanding the release of Aafia Siddiqui, a Pakistani woman jailed by the U.S. on terrorism charges, the hostages safely escaped when the rabbi threw a chair at the gunman.

Afterward, Cytron-Walker credited training from law enforcement, the Secure Community Network, and the Anti-Defamation League for his survival. “They really teach you in those moments, that…when your life is threatened, you need to do whatever you can to get to safety,” he told “CBS Mornings.”

Now, Cytron-Walker is bringing his training full-circle by joining the ADL as a special advisor on security, a paid position to improve the ADL’s outreach and community education initiatives.

“This role allows me to help others – clergy, congregational leaders, members of the media – better understand both the challenges we face and opportunities we have by balancing security and hospitality,” Cytron-Walker said in an ADL statement.

Joining the ADL was a natural step for Cytron-Walker after the hostage crisis, Greenblatt said. The rabbi has a longstanding relationship with the ADL, both from security training and from a friendship with the former head of the ADL’s Dallas office.

“We started talking with the rabbi immediately after the incident,” Greenblatt said. “And we’ve been in touch with him since, and just felt like it made sense from all sides: for him, for us, and for the community.”

Alongside helping the ADL communicate security best practices, Cytron-Walker will also be working to support Jewish communities as they recover from deadly and traumatizing attacks. Greenblatt pointed to the outpouring of solidarity from Muslim and Christian leaders after the hostage situation as the kind of community-building he hopes Cytron-Walker will facilitate. Much of that support was due to relationships that the rabbi built during interfaith work in Texas, Greenblatt said.

“It’s not just about vigilance before an incident happens, it’s also about resilience after an incident happens,” he said. “To be really honest with you, you can never build walls that are high enough. You need not just security, but solidarity. And solidarity means having connections to the [broader] community before there is an incident.”

In February, Cytron-Walker testified to Congress in support of increasing funding to the Nonprofit Security Grant Program, which faith organizations have used to subsidize security training and building fortifications. Part of the rabbi’s argument centered on how all faith groups are in dire need of increased security.

In May, the Department of Homeland Security announced that $250 million is available in the grant program this year, up from $180 million in 2021.

Asked if Cytron-Walker would continue to advocate for increased funding to the nonprofit security grant program under the auspices of the ADL, Greenblatt said there was no specific plan for the rabbi to do so. But “you better believe that we will likely continue to press to make sure there’s adequate funds allocated by the federal government,” Greenblatt said. “And as such, I’m sure Rabbi Charlie will be involved in that with us.”

Greenblatt hopes that Cytron-Walker will be able to use the ADL’s network of partnerships with organizations such as Hillel International to reach more people than he would be able to on his own.

“This is a man of tremendous courage, who endured the kind of really brutal situation which no one should have to experience,” Greenblatt said. “We can learn a lot from him about the security issues and how to build confidence in a community, but at the same time, I think he can learn from us in using our platform to make sure his message reaches the largest number of people possible. So I really think it’s a win win.”