A rapid expansion of IsraAid’s work inside the borders of Ukraine is underway, focusing on mental health access and aid distribution. 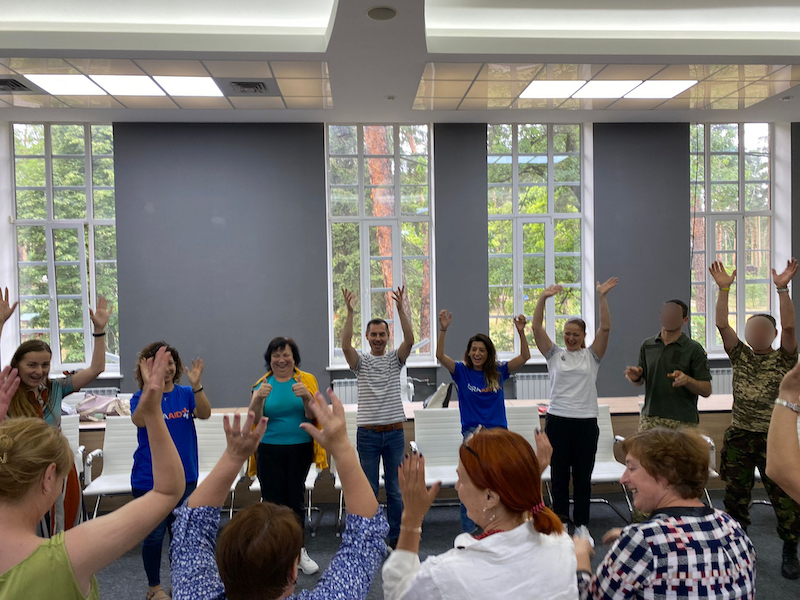 An IsraAid trauma specialist leads a group of Ukrainian social workers and soldiers in PTSD-reducing exercises.

In early July, when Yotam Polizer visited Bucha, the Ukrainian city where Russian soldiers massacred civilians four months earlier, he expected to lay the groundwork for a future project to train Ukrainians to manage war trauma. His hosts, however, had no interest in waiting.

“We didn’t think we would be able to provide any support,” Polizer, CEO of the Israeli humanitarian organization IsraAid, told eJewishPhilanthropy. But after mentioning to officials in Bucha that he was traveling with a team that included a trauma specialist, they told him to come back the next day to run a session.

On short notice, an eclectic mix of Ukrainian social workers and soldiers gathered to learn breathing and physical exercises, which are designed to reduce post-traumatic stress, from the IsraAid specialist. Polizer wasn’t sure how the workshop would go, given that the specialist didn’t speak Ukrainian or Russian, but his trepidation quickly disappeared.

“We had a translator, but even with that, people were so immersed in this experience,” he said. “Many of them said… that it was the first time they could breathe [and] relieve their stress.”

Since the start of Russia’s invasion in late February, IsraAid has sent $30 million worth of medical and humanitarian aid to Ukraine from a coordination center in Romania, while also operating shelters for Ukrainian refugees in Moldova. Now, the post-trauma program accidentally piloted in Bucha’s marks the start to a rapid expansion of IsraAid’s work inside the borders of Ukraine itself, focusing on mental health access, aid distribution, and bringing clean water to the southern Ukrainian city of Mykolaiv, which has suffered heavy Russian attacks.

Those initiatives have grown out of a concern that Ukrainians in the country are being left behind by aid efforts. “The challenges and the humanitarian needs inside Ukraine are so big and are just getting bigger,” Polizer said. “And unfortunately, the world’s attention is shifting away.” To cement aid plans and meet with government officials, Polizer and an IsraAid team traveled to Ukraine from July 5 to 8, visiting Kyiv, Bucha, and the southern port city of Odesa.

When IsraAid first contacted the Ukrainian government in early June to coordinate its new aid efforts, it was a natural fit: Ukrainian First Lady Olena Zelenska has been making Ukrainian access to mental health care a national priority, telling Time magazine that “there could be enormous consequences for the country… if we end up with post-traumatic stress that goes untreated after the war.”

Now partnering with Zelenska’s national mental health initiative, IsraAid will send teams of Israeli trauma specialists to Ukraine for several weeks at a time, while also stationing 10 to 15 aid workers in the country full-time. There, they’ll train Ukrainian health care professionals in ways to help children and injured soldiers – two groups the first lady’s office specifically asked IsraAid to focus on. At the moment, one IsraAid team is already deployed in Odesa.

Polizer was surprised by the Ukrainian government’s prioritization of trauma response. “It’s probably the first time – and I’ve been doing this work for 15 years – that I’ve seen high-level government officials prioritizing psychological support and mental health,” he said.

It wasn’t the only surprise Polizer would encounter in Ukraine. While meeting with officials and aid workers, including from Jewish communities in Kyiv and Odesa, he was struck by a national sense of camaraderie that felt familiar from his own country’s history. “You kind of feel like what Israel was like in the 50s, in a sense that… everyone is kind of giving their life to the country and to the cause,” he said. “It’s just very inspiring, and gave me a lot of hope.”

In Odesa, Polizer finalized a plan to open a new IsraAid distribution center to make it easier to facilitate aid. It’s more sustainable to operate humanitarian aid locally than continuing to ship supplies in from Romania, Polizer said. “If some of the stuff, whether it’s food or medical supplies, is available in Ukraine, we will always prefer procuring in the country,” he said, noting that it’s both faster and “support[s] the local economy, which is crucial at this point in time.”

In Mykolaiv, many residents may soon have clean water for the first time in months. IsraAid is working with municipal officials to bring industrial water filtration systems to the city and has hired a local water engineer to coordinate with Israeli specialists to operate and maintain the systems.

To fund these new aid efforts in Ukraine, which will likely last several years, Polizer predicts IsraAid will need more than $10 million – in addition to the $10 million the group has already raised since the start of Russia’s invasion. And although some of its most significant donors are from the American Jewish community, he said there’s been an unexpected showing from Israeli donors.

IsraAid has received more support from Israelis over the past five months than at any previous time in the history of the organization, Polizer said, attributing the rise to a broader trend of increased Israeli giving.

“The culture is changing,” he said. “It’s not just because it’s Ukraine. There is more awareness about philanthropy in Israel now than before.”

Many Israelis have strong ties to Ukraine, either through the Ukrainian-Israeli community or through the business connections cultivated in Israel’s tech industry. Some giving to IsraAid has been driven by Israeli companies with offices in Ukraine, or companies that feel a responsibility to be involved philanthropically after going public with an IPO, Polizer said.

“They understand the need to have global impact, and sometimes it’s through donations, or sometimes it’s through giving their technologies and expertise,” Polizer said. “Then they realize that IsraAid could be a good partner for them, because we have been working in the humanitarian space for about 20 years in many different countries and contexts.”

Getting the data on compensation for early childhood educators

The blessings of the summer slowdown