Alaska and the Holocaust: An unknown story

It seems as if we have learned little since the second “Seward Folly” except that there are places in this country like Seward, Alaska, who have met the gold standard of humanitarianism when the chips were down and could have, should have, changed the course of history.

Like many of you, I spent many hours this week in front of the TV watching the Olympics. In my house, our favorite sports are women’s gymnastics and women’s swimming, in large part because my wife, Liz, was a competitive swimmer for many years. My interest in the Olympics notched up even further when Lydia Jacoby, age 17, unexpectedly won the Gold in the 100m women’s breaststroke. Watching her hometown fans celebrate, literally jumping for joy was the icing on the cake. For just a moment, all the complexities of the 2021 Tokyo Olympics disappeared. It was the best buzzer beater high school victory I ever saw and I have seen a lot of them.

I wondered for a moment, given her last name, if Lydia was Jewish or of Jewish descent. There is even a branch of my own family with the surname of Jacoby. I could not find anything definitive but one article published by the Jewish Telegraphic Agency strongly suggested the family is associated with the Methodist Church. OK, I said to myself, while I am looking things up (a constant for me), I should continue to read about Seward, Alaska, where she grew up. Why not, I said, to myself, as I had just watched a rerun of the 2009 movie “The Proposal” with Sandra Bullock which mostly took place in beautiful Sitka, Alaska, a mere 549 miles down the coast from Seward. 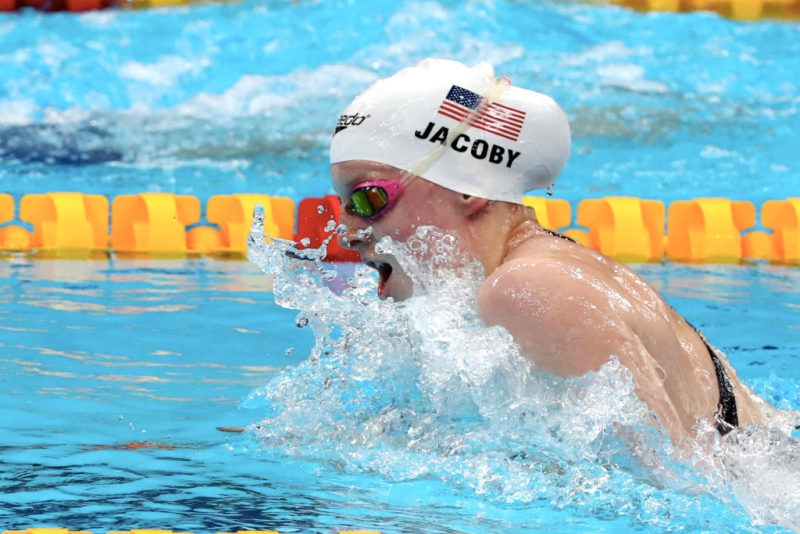 Seward was named after the Secretary of State, William H. Seward who engineered the American purchase of Alaska in 1867 from Russia. Today, Seward only has 2700 people (and no 50-meter pool!). It is 120 miles south of Anchorage (which has the largest Jewish community in the state) and is the home of the southern terminus of the Alaska railroad. The climate of Seward, I learned, is surprisingly mild and the economy is fueled by fishing and tourism. So far, everything about Seward sounded very nice but still nothing of extraordinary interest.

Then, as unexpected as Jacoby’s first place victory, I struck historic gold! In 1938, just two weeks after Kristallnacht, the United States Department of State released the Slattery Report named after Undersecretary of State Harry A. Slattery (1897-1949). Secretary of State Harold Ickes had previously toured the territory of Alaska with several possibilities in mind: improve Alaskan security against the Japanese, further develop the economy of Alaska and, finally, find a place of refuge for German and Austrian Jews hoping to escape Europe. Because Alaska was not yet a state, the usual immigration quotas of 1921 and 1924 did not apply. In other words, there was a legal possibility of finding a safe haven for thousands of doomed Jews. For its part, the people of the town of Seward eagerly endorsed the plan, one of only three places in Alaska, and were ready to throw their doors wide open to the potential newcomers from Europe.

But it didn’t happen. Among American Jews, only the Labor Zionists supported it. Rabbi Stephen Wise, president of the American Jewish Congress and the leading American Jewish spokesman of the day, declared that the Slattery Plan would give people the “wrong and hurtful” idea that “Jews were taking over some part of the country for settlement.” Numerous antisemites went further and called the plan a “Trojan Horse” which would allow Jewish Marxists to sneak into the country. For his part, FDR kept the plan under wraps and privately declared that only a maximum of 10,000 people a year should enter the United States under Slattery and that there be a sub-quota of a maximum of 1,000 Jews a year in that group. Thus, the Slattery Plan died without ever seeing the light of day and Seward, although willing, did not become the Jerusalem of the North. However, the plan did win some support from the Federal Council of Churches and the American Friends Service. Five years later in August 1944, the United States settled just under a thousand Jews in Fort Ontario near Oswego, New York. It was the only rescue-settlement conducted by the American government during the Holocaust while “Jewish quotas” generally were not met.

The United States, FDR and the American Jewish community all failed miserably to rescue Jews during the Holocaust. That discussion is beyond the scope of this essay. However, in the years after WWII the United States, at the urging of Representative Emanuel Celler (D-NY), did admit over 600,000 Holocaust survivors and, by the mid-1960s over hauled its basic immigration policies. In our own day, too many xenophobic Americans seek to reclose the doors to this country. It seems as if we have learned little since the second “Seward Folly” except that there are places in this country like Seward, Alaska, who have met the gold standard of humanitarianism when the chips were down and could have, should have, changed the course of history.