A Tulsa, Okla., congregation has become an official resettlement agency 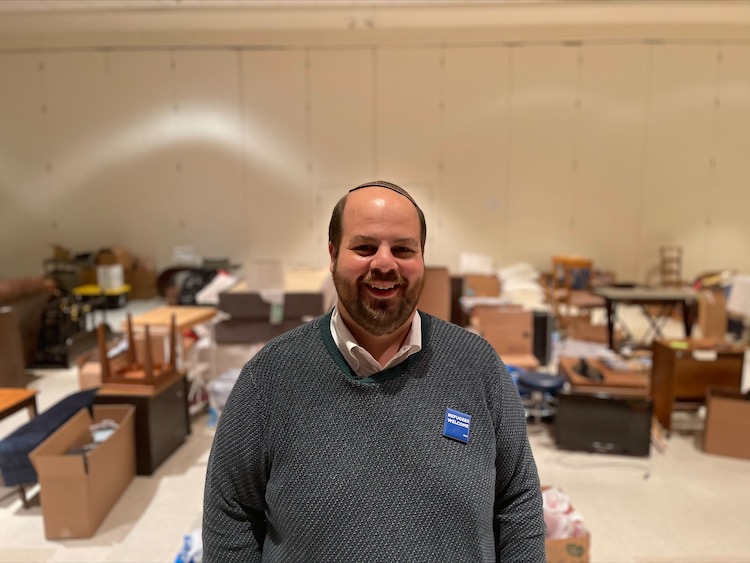 Rabbi Dan Kaiman is an evangelist for small-town Jewish life. He grew up in one, and now serves as the spiritual leader of Congregation B’nai Emunah in Tulsa, Okla., where congregants gather to pray, learn and smoke meat for a monthly deli pop-up. Even in a small town, Kaiman said, a synagogue has the opportunity to serve its congregants and its community in unexpected ways: as a sanctuary and a refugee resettlement agency.

B’nai Emunah is scheduled to receive its first refugees — an Afghan family of four — Wednesday evening.

“Imagine you are moving to a place and you have a cousin who lives there. We are the cousins,” Kaiman said, noting that while the congregation has leased a warehouse to store donated furniture and other goods, the synagogue itself is also serving that function. “We’re building a plane as we’re flying it,” he said.

In early October, the congregation became an official resettlement agency, credentialed by the State Department and affiliated with HIAS, the Jewish organization that supports and coordinates local agencies like B’nai Emunah. No synagogue has played that role in two decades, said Alicia Wrenn, HIAS’s senior director for resettlement and integration.

B’nai Emunah had been a longtime supporter of Catholic Charities of Eastern Oklahoma, which was the only official resettlement agency in the area. When Joe Biden was elected president, Catholic Charities suggested that B’nai Emunah become a second agency, given the likelihood that the Biden administration would raise the number of refugees allowed in the country and increase the need for such services. The synagogue asked HIAS to support its application, which heard B’nai Emunah’s proposal as a courtesy until they realized that the synagogue had the requisite experience and expertise due to their prior work with Catholic Charities.

“None of us sitting here in D.C. or New York knew much about Tulsa, and we weren’t going to entertain a partnership because it’s a very long process and we don’t do this lightly,” Wrenn said. “But they weren’t going to take ‘no’ for an answer.”  HIAS’s usual partners are Jewish social service agencies.

B’nai Emunah will help settle about 50 Afghan refugees between now and the middle of February, which means supplying housing, outfitting the housing with essentials and helping each individual access basic services, whether that’s education, medical care or job training. The director of the program and a social worker have their offices in the synagogue. The State Department allocates a certain amount of money per refugee, and the agency must fundraise to meet any additional needs, which Kaiman is prepared to do, Wrenn said.

This resettlement program has brought the community back into the building after two years of lockdowns and virtual services necessitated by the coronavirus pandemic.

“It’s still hard to imagine 500 people coming back in for an event, but it’s easy to imagine lots of people going in and out as volunteers doing specific jobs,” Kaiman said.

Service work is central to B’nai Emunah’s culture. Kaiman, 36, uses an electrical metaphor to describe the congregation of between 400 and 500 member families, which serves a Tulsan Jewish community of about 2,000. B’nai Emunah is most closely associated with the Conservative movement, although it is not a member of the United Synagogue of Conservative Judaism. There’s also a Reform congregation and a Chabad house in the city.

“You can get power from two outlets on a wall,” he said, which in a synagogue symbolizes prayer and education as two access points to Judaism. “We want to be a power strip, with lots of coequal places to plug in.”

Ordained at the Ziegler School of Rabbinic Studies at American Jewish University in Los Angeles, Kaiman was born in Pensacola, Fla., and moved to Maplewood, N.J., when he was 13. Due to the move, he’d experienced the richness of metropolitan Jewish life, and when it came time for him to look for his first pulpit, he looked at every job posting. The opening in Tulsa caught his eye, because he is a strong believer in the spiritual value of service motivated by Jewish learning; B’nai Emunah was already engaged in similar efforts under Rabbi Marc Fitzerman, who serves alongside Kaiman now, although he has reduced his hours.

Even before he arrived nine years ago, the synagogue was working with Mental Health Association Oklahoma to operate Altamont Bakery, which employs formerly homeless people as bakers of such goods as gourmet, prepackaged chocolate chip cookies that are sold around town in places like cafes and hospital cafeterias.

Kaiman visited the community, and felt excited by the sense that he could make a real difference in Tulsa and its Jewish community.

The deli pop-up was inspired not by the existing bakery, but by a conversation about the necessary components of a Jewish community, such as a synagogue, and a school … and a deli. Kaiman and his congregants started to wonder why there wasn’t a deli in Tulsa, especially in a state known for ranching, so a group of them — mostly men, mostly older — started trying to make pastrami.

In 2016, the idea won Kaiman a two-year fellowship from the Clergy Leadership Incubator (CLI), which operates under the umbrella of the environmental group Hazon and encourages rabbis to develop innovative ideas that have the power to transform their communities.

“Like so many rabbis who have been part of the CLI Rabbinic Fellowship, Dan Kaiman had a full plate of responsibilities that he was expected to fulfill. And yet, his instincts told him that some outside-the-box thinking could engage more Jews than might otherwise engage in the more conventional offerings of his congregation,” said Rabbi Sid Schwarz, director of the fellowship.

Now, there’s a professional kitchen in the synagogue, and a bunch of volunteers, including women, who are interested in kosher culinary experimentation. Kaiman calls them the D.L.T., for “Deli Leadership Team,” and they try not to write down their recipes, preferring to think of their work — tongue in cheek, of course — as akin to the oral Torah that was passed down from Moses until it was written down as the Mishnah.

Pre-pandemic, one Sunday a month, they turned the front hallway of the synagogue into a restaurant that serves the results of their labors, in addition to homemade French fries, for a cost of $18 a person. Usually, about 30% of the people who attended the event were members of the synagogue or the Jewish community, while the rest were curious Tulsans. The deli has reopened for takeout, and Kaiman hopes to relaunch the in-person events in January.

“The deli helps us be seen by the larger community in a different way,” he said.

It also helps the congregation see itself differently — as a part of something larger.

Kaiman is also keen to state that pre-pandemic, B’nai Emunah was also a center of prayer and learning, and will become so again.

“It’s a spiritual community, with a big emphasis on music,” said John Schumann, a member of the congregation, adding that it has a youth choir and a band called Klei Kodesh, which means “holy vessel” in Hebrew. “We always have a minyan,” he said, referring to the quorum of ten adults required to hold a complete prayer service.

“Yeah,” Kaiman said. “We run a deli and a refugee resettlement agency, but we have a bar mitzvah this weekend.”