Hide Search
You are here: Home / The Blog / A Preliminary Theology of Social Networks 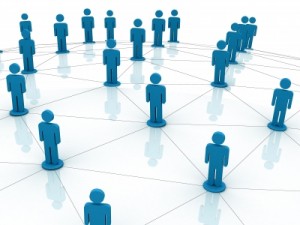 One of my findings from interviews with rabbis that I conducted for my book, Tomorrow’s Synagogue Today, was their lack of specific, intentional connections between their personal theology and their congregation’s organizational structure. I asked them how their personal theology influenced their congregational governance, how they worked with volunteers and similar types of issues that are often labeled as the “business” or “administrative” side of congregational life. This lack of conscious connection really didn’t surprise me because structural issues and theology don’t naturally mix. They require a leader to constantly work at making those connections and creating patterns of organizational behaviors that are infused both with spirituality and effectiveness at getting work done. And it’s difficult for rabbis who are juggling many balls to reflect on how their theology can amplify their work on the structural side of congregational or Jewish organizational life.

As people like Beth Kanter and Allison Fine made clear in their book, The Networked Nonprofit, networks are the new form of organizational structure in the 21st-century. (Actually, Jessica Lipnack and Jeffrey Stamps predicted in 1994 in The Age of the Network that networks would be the signature form of organizations in this century and I wrote about network organizations for the Jewish community in 2001 in Network Judaism). The bedrock of social networking sites, the platforms that support network organizations, is relationships. Social networking sites enable many different levels and types of relationships. They allow people who know one another well to remain in closer touch, permit people who know one another casually to deepen relationships and facilitate brand new relationships. They encourage people who share common interests to collaborate in sharing resources and solving problems. Social networks are blind to issues of socioeconomic class, race, gender, sexual orientation, levels of education, professional titles – and the list goes on. In theory, social networks give individuals an equal voice regardless of difference and they enable people to transcend national boundaries.

Networks are really beginning to reach their potential to reshape organizations, so now is the time to ask, “What role can a theology of networks play in our awareness of synagogues and Jewish organizations?”

As I reread the first chapter of Rabbi Art Green’s most recent book, Radical Judaism, I began to glimpse what a Jewish theology of social networks could be like. Green, one of today’s most original contemporary theologians, describes himself as a neo-Hasidic Jew and a religious humanist.

My theological position is that of a mystical panentheist, one who believes that God is present throughout all of existence, that Being or Y-H-W-H underlies and unifies all that is…’Transcendence’ … (in this context) means rather that God-or Being-is so fully present in the here and now of each moment that we could not possibly grasp the depth of the presence… There is no ultimately duality here, no “God and the world,” no “God, world, and self,” only one Being and its many faces… There is no end to its unimaginable depth, but so too there is no border, no limit, departing that unfathomable One from anything that is. Infinite Being in every instant flows through all finite beings…”

Every creature and every life form is a garbing of divine presence. The way in which we treat them and relate to them is the ultimate testing ground of our own religious consciousness…. The purpose of our growing awareness is to reach out and appreciate all things for what they really are. This is especially true with regard to our fellow humans.”

Without meaning to reduce Green’s deep theological thought, he makes the case that the same One underlying unity is within each of us. That awareness is precisely what social networking can reinforce within congregations because networks have the potential to span significant differences. I wonder what the experience of being a part of a congregation would be like if rabbis maintained a vigilant awareness that God’s presence was actually pulsing through all aspects of the congregation and that the current structures and organizational divisions that characterize congregations actually conceal their inter-connectedness and make the parts less than the sum of the whole. Social networking as an organizing concept can enable participants in a congregational community to connect with one another, to share, to learn, to solve complex problems and to see the possibility of each part of a system contributing to a transcendent whole. And if that is not a manifestation of the divine, I don’t know what is.

I understand that social networking has a very dark side to it as well. My point is not to argue the benefits and the detriments of this relatively new way of organizing. Rather, it’s to encourage rabbis and Jewish theologians to bring our theological beliefs to this new form of organizing. Compartmentalizing our beliefs from one aspect of organizational life diminishes the overall power of that organization to have a deeper impact. And that is especially true of congregations.

These are some preliminary thoughts about a Jewish theology of networking. I realize that they are a little amorphous and preliminary. So I’m asking you: what other theological stances do you bring or aspire to bring to congregational life so that belief can animate the structures of your congregation in a way that nourishes them?