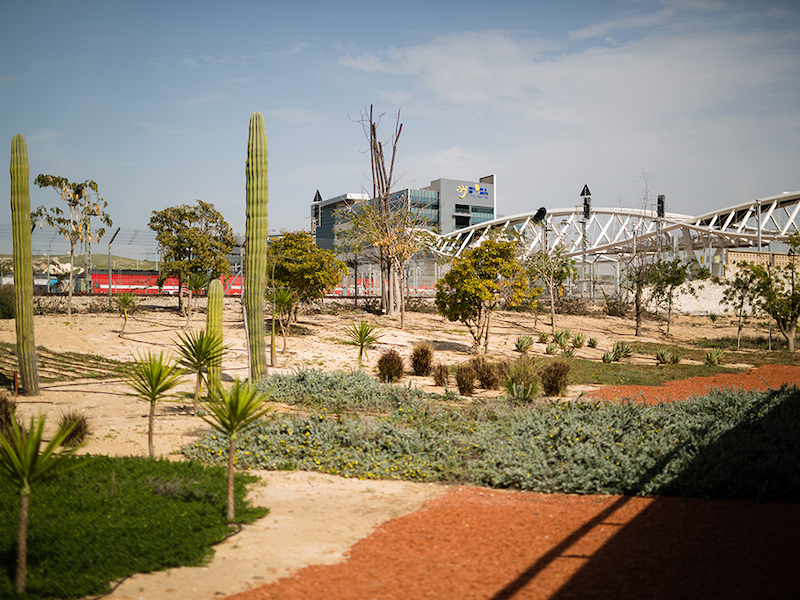 A bridge to Ben-Gurion University in Beersheva.

In downtown Jerusalem near Jaffa Street, less than half a mile from Zion Square, a plot of land that now houses a parking lot and a collection of aging buildings may soon enable thousands of low-income Israeli students to receive scholarships to the nation’s premier colleges and universities — and a ticket to jobs in the country’s vaunted tech industry.

The two-and-a-half-acre piece of land is owned by the estate of Albert Benin, a real estate developer and businessman who died in 1999. But this year, following a lengthy rezoning process, it is going on the market. After the sale is completed, the price it will pull in — likely nine figures in dollars — will become an endowment for a nascent initiative called the Benin Scholars Program, run by the UJA-Federation of New York, which currently provides full financial support and professional coaching to disadvantaged students at three Israeli academic institutions.

Right now, the initiative is in its second year and has an annual budget of $2 million, which is funded by previous real estate sales and covers tuition, room and board, professional coaching and psychological support for 180 students. But after the sale, that number is slated to increase to 700.

“[The land] is expected to generate a significant amount of money that will significantly increase the size of the scholarship program,” Irvin Rosenthal, UJA’s recently retired CFO, who is consulting on the sale and the endowment, told eJewishPhilanthropy. “As far as we know, it’s the largest undeveloped tract of land in the center city of Jerusalem.”

As of now, the program, which is named for Albert Benin’s parents, Rachel and Selim, is expanding. This year, it added 30 students at Ben-Gurion University in the southern city of Beersheva. Other scholarship awardees are at the Hebrew University in Jerusalem and Sami Shamoon College of Engineering, also in Beersheva.

According to Itzik Shmuli, UJA-Federation’s director general in Israel, students qualify economically for the program if they meet the requirements for a full scholarship at the university they’re attending. The scholarship recipients cut across Israel’s demographic cross section, he said, though UJA-Federation could not provide exact numbers. Another goal of the program is to increase diversity in Israel’s tech sector, which has been criticized for being insufficiently diverse.

“The program basically targets and recruits from a diverse group of young adults in the periphery who have excelled in math and science during high school and have the potential to graduate successfully given suitable and holistic support,” he told eJP. “Yes, they are going to learn attractive professions, but at the same time, we think we need to be proactive when it comes to integrating them into the labor market and making sure that they are on their way to success.”

At Ben-Gurion, the scholarship recipients will join a student body in which nearly half of students come from Israel’s Negev Desert region, many of whose cities are smaller and have lower-income populations. The school has increased its Bedouin student population tenfold in the last 15 years, from 60 to more than 600, and already provides a suite of services to low-income or minority students to help them integrate on campus — from Hebrew classes to a program that stretches the first year of school out over two years. Another program allows students to begin studying engineering at a Ben-Gurion extension school in EIlat and then transfer.

“For many of them, this is their first time ever leaving their villages,” Daniel Chamovitz, the university’s president, told eJP. “Hebrew is their second or third language, and coming from the lowest social-economic stature in Israel, for them to come onto campus and believe they can succeed against all of these other students… for them it’s this massive social gap.”

Chamovitz himself grew up in a small city near Pittsburgh, and recalled feeling intimidated when he arrived as a student at Columbia University in New York City. He earned a Ph.D. in genetics, and said the strength of the Benin Program is that it gives disadvantaged students a pathway into the lucrative fields of tech and the sciences. He said students in those concentrations have no trouble getting jobs after they graduate.

The Benin Program’s structure also recognizes that getting into college, and doing well academically, is sometimes not enough for low-income students to succeed on campus. The cohorts of students on each of the three campuses also have a full-time coordinator to provide support for them if they encounter a personal crisis or face obstacles academically.

“That kind of hand-holding, to the extent that they need it, is there for them,” said Yael Israel-Cohen, director of planning and strategy for UJA-Federation’s Israel office. “Many are the first generation [of their family] in higher education, and that additional person making sure they feel confident and fit in is a very important part.”