The center is the latest medical institution in Israel to embark on a major construction project in order to bomb-proof its activity. 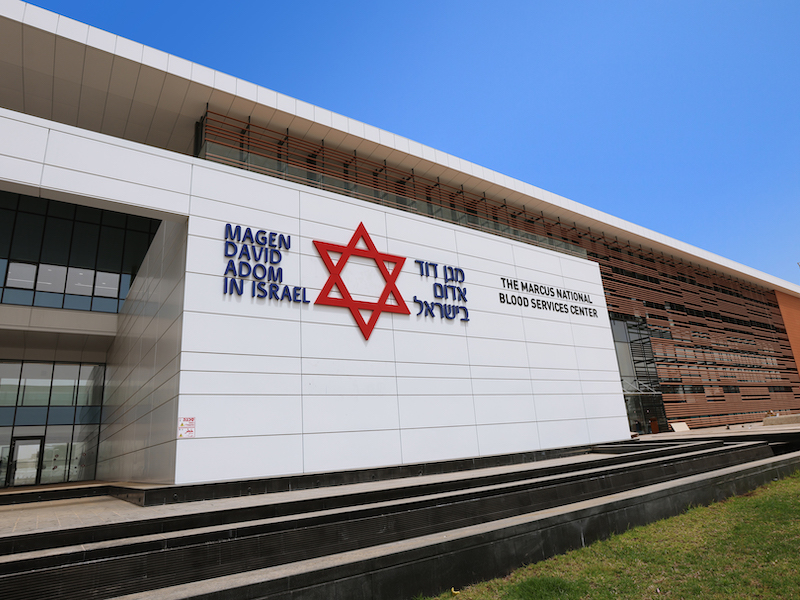 An image of the Marcus National Blood Services Center.

In the summer of 2014, when Israel fought its longest and most intense war with Hamas in Gaza, the emergency medical organization Magen David Adom faced a dire problem — how to continue processing blood donations while keeping its blood bank and processing facility safe from incoming missiles.

The processing center, an especially critical institution during wartime, was built at Sheba Tel-HaShomer Medical Center in Ramat Gan, a suburb of Tel Aviv, in 1987 — more than a decade before Israel began to regularly contend with missile volleys from Gaza. So to protect its infrastructure from Hamas rockets, MDA staff would have to quickly move machinery downstairs into a small basement space that wasn’t built for blood processing.

“It was really a partial operation because we didn’t have room for all the necessary equipment,” Moshe Noyovich, an engineer who worked on the Ramat Gan center, told eJewishPhilanthropy. “So you have to schlep it down, position it, install it, calibrate it and operate it in a very small, narrow shelter.”

The 2014 war marked the first time Hamas rockets could regularly and reliably target the Tel Aviv area, and by then MDA had realized it needed a new blood center that could withstand rocket attacks without interrupting the center’s activity. That year, it negotiated with the Israeli government for a parcel of land in the central Israeli city of Ramle.

Eight years later, the new blood center is about to open, with Noyovich as its lead engineer and with $135 million in funding largely coming from American donors. A dedication ceremony will take place today for the 500,000-square-foot facility, which aims to be fully operational within three months.

“The [new] plant has enough capacity and it is totally protected,” Noyovich said. “What we will have at the new facility, and we really don’t have today, are protections against conventional threats, protections against biological and chemical threats in the laboratory area, full cyber protection, physical protection… It’s a risk analysis of what may jeopardize the operation.”

The center is the latest medical institution in Israel to embark on a major construction project in order to bomb-proof its activity. More than a decade ago, the Tel Aviv Sourasky Medical Center built a four-story hospital underground, and Haifa’s Rambam Medical Center likewise has an underground medical center with a 2,000-bed capacity.

“We really had to think about a missile attack and what would happen to the national blood supply of Israel if a missile were to hit the current blood center,” Catherine Reed, CEO of American Friends of Magen David Adom, the group’s U.S. fundraising arm, told eJP. “It would be gone. And that would be the end of the blood supply for whatever period of time it would take us to get blood from abroad.”

The facility will be called the Marcus National Blood Services Center, named after Home Depot founder Bernie Marcus and his wife, Billi, who donated $35 million, about a quarter of the building’s total cost. Reed framed her fundraising pitch in terms of focusing on medically saving lives, a message that she says cuts above Israel’s political, ethnic and religious divides. “The fact that it’s about life and death really means a lot to donors,” she said.

Reed acknowledged that Israel has less need for American financial support than it once did. The underground facilities in Tel Aviv and Haifa, for example, both bear the name of Israeli billionaire Sammy Ofer. But Reed said she hopes American philanthropy to the blood center can help persuade Israelis to give more.

“For American Jews it is important for us to be involved in Israel, and I like to think that we serve also as an example to the Israelis who have the ability to give, who may not be giving at a level that’s commensurate with their ability,” she said. “In the States, for us it’s something that’s ingrained in a way, and built into our tax system, so that also makes a difference.”

Israel’s population has more than doubled since 1980, and the new center will be able to process 500,000 blood units (a little less than one pint each) per year, up from 270,000 in the current center. The center will process blood for day-to-day medical operations in addition to emergencies, but will be able to ramp up its activity during disasters, wars and in the aftermath of terror attacks. Its location was chosen because it’s at the nexus of a few central highways and is close to rail lines.

But the main selling point, Noyovich says, is the protective infrastructure, which includes reinforced concrete and blast doors. It also has backup power sources in the event of an outage. Noyovich said he was restricted by government protocol from detailing the exact levels of protection, but said the measures taken could shield the center from “things that are more serious” than rockets from the Hamas and Hezbollah militant groups.

Much of the most important equipment will be housed in three underground levels that will house protected labs, a logistics center and a space for outfitting ambulances and blood mobiles. The center also includes three floors above ground for blood donation, training, staff space and a breastmilk bank.

The center won’t solve all of Israel’s problems with blood donation, which include shortages around the Jewish holidays, when fewer people donate. There was also a recent shortage due to spiking COVID-19 rates and, reportedly, backlash from religious groups that opposed a change on the blood donation form that aimed to be inclusive of LGBTQ Israelis.

Noyovich said that though the new center will include a donation facility, getting people to donate is a matter of persuasion, not infrastructure.

“That’s a problem that MDA will have to deal with for years to come,” Noyovich said regarding the recurring shortages. “The new facility will not have any effect because you cannot store the blood for more than 42 days… It’s [about] educating the public to donate.”