The kids are alright

2,500 Jewish teens are gathering in person at BBYO’s international conference 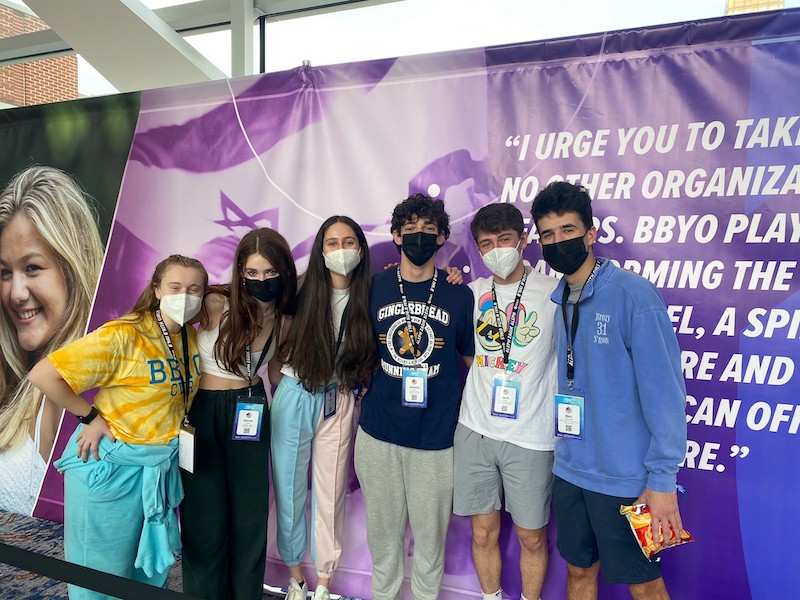 Concerts, dancing and games. Appearances by celebrities. A menu of Shabbat service options. Days filled with workshops, meetups and hanging out with other teens.

Before March 2020, that would have seemed like a standard, even unremarkable description of an international Jewish youth group conference. Two years later, the BBYO International Conference, which began Wednesday in Baltimore and runs through the weekend, rates as one of the biggest in-person Jewish gatherings since the beginning of the pandemic.

The non-denominational youth group’s last in-person International Conference, two years ago, drew more than 2,000 teens. This year’s will draw 2,500 from around the United States and world; its theme is “The Power of Us,” and will include a roster of speakers ranging from Sen. Jon Ossoff (D-GA) to the actor Simu Liu, who plays the lead in the recent Marvel movie “Shang-Chi and the Legend of the Ten Rings.”

BBYO CEO Matthew Grossman told eJewishPhilanthropy that the conference being one of the first major Jewish in-person gatherings of the pandemic “means we’re bringing something back that was lost.”

The conference includes extensive public health precautions: All participants must be boosted and test negative twice — once via PCR and once rapid — before attending.  Events will be masked and spread out as much as possible, especially during meals, Grossman said.

“You have to know what your audience really wants,” Grossman said. “We know teens and their parents overwhelmingly want this to take place, which excited and motivated our professional team.”

BBYO is also emphasizing the  mental health of its teens, especially given the difficulties of the pandemic. “We’re working hard to be a place where we can help young people recognize the challenges they may be facing, when they may need help, and how they can find that help,” he said, “And we’re doing that by creating safe environments for them to share what’s going on in their lives, and making sure that our professionals and our volunteers know how to identify when a teen needs help.”

Traditionally, BBYO has been separated into two groups, a “fraternity” called AZA, and a “sorority” called BBG — terms which may familiarize teens with Greek life as they prepare to enter college. But more recently, BBYO has aimed to be a space where everyone can find themselves, however they identify when it comes to their Judaism or gender. Grossman said that there are “several committees working across the international order” on the issue of gendered language and inclusion, with representation from different countries and communities with varying beliefs.

“As a leader, embracing my own work identity, as well as the identities of those I work with has been an invaluable lesson,” high school senior Avi Gorodetski, one of the conference’s teen coordinators, told eJP. “Every teen in our movement has varying personalities which are fairly constant on their own, but being on a team can bring out aspects of each of us that we don’t normally experience when working by ourselves.”

One of the ways in which BBYO hopes to train its members to be leaders is through its Leads Day on Friday, in which participants engage in leadership activities and community service, most of which takes place throughout Baltimore. For example, IC participants will bring supplies to the St. Francis Neighborhood Center (SFNC), the oldest youth enrichment center in Baltimore, in support of their anti-poverty work.

The conference is supported by a long list of major Jewish charitable foundations, some of whose representatives will be at the conference, and is also partnering with Mike Leven and the Jewish Youth Pledge to encourage teens to make a philanthropic commitment to supporting the Jewish community into the future. The philanthropists and other adult Jewish professionals and activists have a parallel schedule to that of the teens, featuring discussions about workplace burnout, Israel, Jewish teen engagement and other topics. The adults also have chances to interact with the teen attendees leading up to Shabbat.

Author Rebecca Soffer, the co-founder of ModernLoss.com, will speak to attendees about resilience. She told eJP that she’s excited to “feel their energy and get energized from that myself.”

“I read a lot of anecdotes about teens who say they’ve forgotten how to socialize, who hang around in their room and report that online interactions have made them feel lonelier,” said Soffer, who went on a BBYO tour of Israel when she was 16. “Everything is so amplified at that age… In a time that is so incredibly lonely, still, I want to remind these kids that they have power within themselves and when they harness that power they can pull others through and create community.”