What will be our inspiration and idealism that will carry us through the thick of this painful Jewish educational and sociological battle without quitting or annihilating our conscience along the way? by Paul Steinberg Throughout this past year, I didn’t hear of any Jewish e … END_OF_DOCUMENT_TOKEN_TO_BE_REPLACED 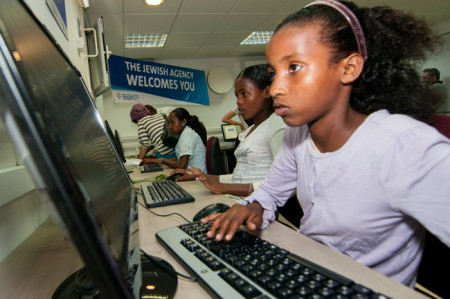 The Jewish Agency for Israel has dedicated a new computer room for the Ethiopian immigrants who have recently arrived at the Ibim absorption center in Southern Israel. The computers will provide critical education and a gateway to successful integration into Israeli society for … END_OF_DOCUMENT_TOKEN_TO_BE_REPLACED

The Union for Reform Judaism (URJ) and Camp Harlam, the URJ's Philadelphia-based regional overnight camp, announced that they will open a URJ-affiliated day camp in the summer of 2014. The URJ's most recent foray into Jewish day camping is a strategic initiative meant to … END_OF_DOCUMENT_TOKEN_TO_BE_REPLACED

Dr. Miriam and Sheldon G. Adelson have provided a new $40 million gift to Birthright. The gift brings the Adelsons' total donations to the program to $180 million, making them the world's largest private donors to Birthright Israel. Their gift includes a new $20 million … END_OF_DOCUMENT_TOKEN_TO_BE_REPLACED

[This post is part of a series from Hebrew Union College-Jewish Institute of Religion, The Jewish Theological Seminary and Yeshiva University on the online learning experience.] by Ilana Turetsky, EdD The upcoming summer semester will mark my fourth semester teaching online … END_OF_DOCUMENT_TOKEN_TO_BE_REPLACED